Harrison Owen and getting out of the way 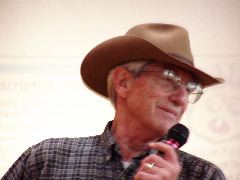 One of my favourite photos of Harrison Owen, courtesy of Peggy Holman

This morning I got to play the role of host/interviewer to my mentor Harrison Owen, the guy that accidentally invented Open Space Technology and unknowingly changed my life. It was when I participated in my first Open Space conference in 1995 that I knew I had found the core of my path in work.

Truth be told, interviewing Harrison is the easiest job you could ever want. You basically do what you do when running an Open Space meeting: ask the question and get out of the way. This morning’s conversation was part of a series my friends at Beehive Productions are running on the origin stories of various participatory processes and methods, and so I wanted to get some stories from Harrison about what was going on for him BEFORE Open Space arrived in the world in 1985. You can go and listen to that story for yourself.

Despite being a student of Harrison’s work and legacy for 25 years, I’m never surprised to learn a new thing from him, and today was no different. It was all about simplicity. Harrison shared some stories about how his work and academic studies help him discover that things like myth, ritual, story, Spirit, self-organization and the dance of chaos and order are near-permanent features of human experience and indeed, are features of the cosmos which a 13.7 billion year history. Harrison told a few anecdotes about how he discovered along the way that no matter what one did or didn’t do, these forces were constantly at play in organizations. Many times they helped people get stuff done, but occasionally these dynamics produced problems.

In the late 1970s, Harrison got involved with the organizational development community and much to his chagrin, discovered that people were trying to solve some of these problems by creating other problems, like relying on control, linear problem solving, or ignoring the deep myths and stories that permeate all organizations. When folks did that they ended up creating more problems, and now you had to solve both the original problem and the one you had created by trying to solve in the original problem poorly.

Harrison’s genius. ad the genesis of Open Space was really his sense that the fundamental dynamics – myth, ritual, story, self-organization, Spirit, and the chaos/order dance – are actually the tools you need to address most problems in organizational life. His practice became finding one less thing to do, or as I said in the interview, “steadily removing all the things that get in the way of those dynamics showing up.”

Facilitating Open Space meetings, and indeed, practicing the leadership art of holding space (or “hosting”) is really about stripping away all the things that stop self-organization from doing its thing. Harrison has a radical commitment to this and its always interesting to see him respond to people who say “yes, but what about…” He just keeps exhorting people to get out of the way and make sure that while you are disappearing from view you take the barriers to high-performance action with you. Many of the objections that some people have to using Open Space Technology for a meeting tend to come from the idea that they think they can add a thing that is most important for the group to experience or do before they get down to self-organizing around important issues. In truth, if people are gathered to work on important issues, the worst thing you can do is dely them from getting to work, and that’s doubly bad if you are delaying a whole group because of one person’s anxiety.

I can’t quite describe how Harrison makes me feel when I read him or hear him speak. Clear, might be the word. Fierce. A bit cheeky perhaps. Whatever it is, that feeling hasn’t changed since the moment I met the man in 1996. I don’t think he’s changed a bit, either. He discovered something profound about organizational life in the 1970s and he has turned that into a 40 plus year global experiment, enlisting thousands of collaborators along the way. He codified some of that experiment into a method called Open Space Technology, but his work and its implications are much broader than a meeting method. You can read what he refers to as his “Final Report” in his 2008 book Waverider. In that book, he basically challenges the management, leadership, and OD fields to ask some serious questions about their practice, because Open Space has shown that almost every problem, no matter how intractable, can be addressed in a much simpler way than we are all led to believe: “Not only do we live in a self-organizing world, but our job – or perhaps better, our opportunity, is to leverage this force for our purposes and so ride the waves of self-organization as an intentional, and conscious act.” Here is an intro to that book.

This isn’t a naive perspective either. Harrison’s folksy demeanour can sometimes cause people to miss how sharp and incisive he is, and how grounded are his insights. Open Space is a gift to the world, and it isn’t even Harrison’s gift to the world. It is the world’s gift to the world. In Harrison’s terms, it is the gift that the 13.7 billion-year-old universe has given us. Once you get that, it will irrevocably change how you do your work and how you live your life. You will have the radical realization that you are participating in a universe that made you a participant in the grandest Open Space of all.