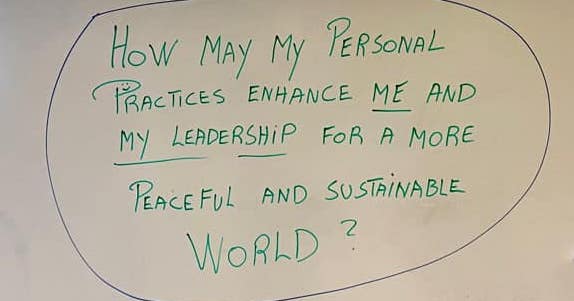 The other day on the Art of Hosting facebook group, my friend Cedric Jamet asked folks for some materials about the four fold practice, which is the basic essence of the Art of Hosting. Toke Moeller weighed in with his latest posters from a session he was leading with graduate students in sustainability leadership.

Toke was, of course, one of the originals who put the four fold practice together and like all good generative frameworks, it has changed over time and it gets expressed in different ways depending on context. But the essence is that it balances self-awareness and focused practice on a life of participation in the world with the good leadership practices of hosting others and co-creating useful things. I’ve written about it alot. Upon this framework hangs a world of practices from meditation and reflection, to good dialogic practice, to facilitation and participatory leadership and decision making.

I have worked with Toke enough to know that what he probably did was to teach these four practices and then have people discuss where they show up in their own lives, and so I thought I would take his words, in bold, and reflect a little as if I was a student in the class. The prompt question Toke asked his class was “How may my personal practices enhance me and my leadership for a more peaceful and sustainable world?”

Host yourself to know yourself – be awake. These days I am finding myself on autopilot alot. Same rhythm, same kinds of activities, all done at the same desk, the same way. It has been a hard winter following on a hard year in terms of mental health, and a couple of holidays including one just ending now have served to create some breaks in my routine. I will see what i come back to, but one ritual I will be retaining is an early morning contemplative walk and 20 minute sit in a place near my house, next to the sea. To get out in the morning has been a godsend, and my physical and mental health needs this. All in service of jagging myself awake. I feel like I am in danger of a mental slumber. And so, break a pattern to awaken a pattern.

Be hosted to grow the listener and student in yourself – be a curious participant. The last two years have deprived me of one of my favourite activities, which is to sit and listen to others tell stories. I haven’t been travelling, I haven’t been sitting at the pub welcoming whoever walks in. There is no better way to develop your curiosity than to sit and listen to another person telling a story. Social media doesn’t cut it. I find myself too quick to respond, often unable to discern nuance. My curiosity gets pinched down to a small sliver and my judgement, fired by brain chemicals, gets all the fun. So practicing listening, to the forest and the sea, to the conversations of my neighbours in community, trying to figure out what to do as we come back together again, with a two year absence of joint history making. Listening to clients. I am looking forward to my first hands on facilitation gigs (not open space) where listening is a key part of what we will be doing. I’m all ears.

Step up to host others so they can grow their listener and the lifelong student in them. Years ago Toke and nI were sitting by my wood stove talking about teaching as we were preparing to deliver an Art of Hosting on Bowen Island. We were kind of humble-bragging – if I’m honest – about how we weren’t really teachers, but life long students. Caitlin, listening from the kitchen asked us a piercing question. She, who comes from a four generation line of teachers said “What is it about being teachers that makes you so afraid to be one?” I think we eventually answered that it was something to do with not wanting to lose our curiosity and learning in the role of the teacher-expert. She continued to point out that people were actually coming to the workshop to learn from us, and that we could also learn alongside them. She was being kind. There is a both-and about this. We decided to call ourselves teacher-learners and for me this practice captures that. Host other so that they become teacher-learners too.

Host together – co-create and co-lead: build capacity to build more capacity. It has been a long time since I saw Toke in person. It was, I think, many years ago during a gathering on harvesting practices in Halifax. We spent an hour together having lunch in a restaurant and talked about where our journeys were taking us. Toke was recovering from a small stroke and this was the first overseas trip he had taken. The stroke had imposed some constraints on what he could do and how his mind operated, and he and I talked about how, at a certain age, one moves into building capacity. You stop doing things for people and you build the capacity for them to do it too. And that way, you can continue being a part of the things you love doing while also being sure that those things could be sustained in a community of practitioners. That has been my life these days. “Support” is how I approach everything. I do it with money, time, opportunities, credibility, connections…whatever. I support causes and people that are important to me including lifting up Indigenous leaders and communities, younger dialogue and complexity practitioners, young and developing soccer players and many others. I have learned a lot from Toke and others and all of it was freely given, and for a gift to work it must be given away. So I give it away.

Now, if it interests you, have a go at answering Toke’s prompting question here in the comments or elsewhere on the open web, where we can share and compare.