The swirl of life in the Salish Sea 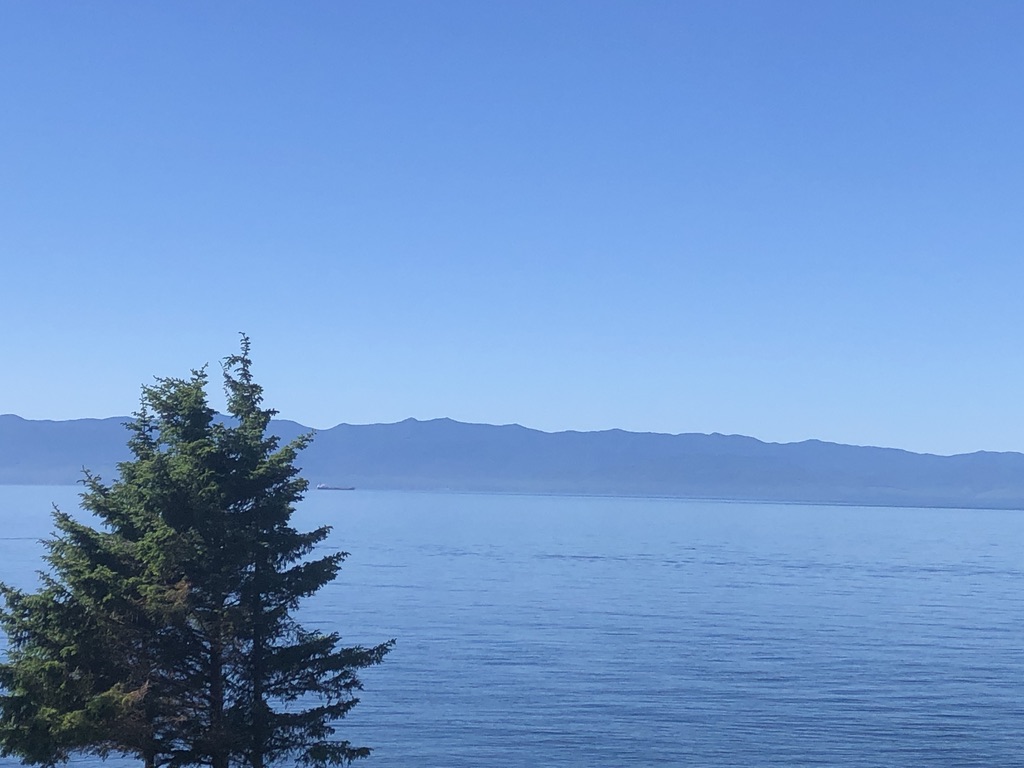 Slack tide in the Salish Sea.

These are the Olympic Mountains across the waters of the Juan de Fuca Strait, the body of water that links in inland parts of the Salish Sea to the open Pacific Ocean. So much water flows through this passage twice a day with the ebb and flow of the tides, that the Strait takes on the quality of a slow river, flowing in two directions, in and out, two great long breaths a day, taking in cold North Pacific water, and exhaling the fresh water from the mountains and snowpacks of the Coast and Cascade Mountains, and the silty flow of the Fraser River – Sto:lo, as it is known on the coast.

AS a result of this flow there is tremendous life in this region. Many times a day freighters come and go through the Strait, heading to the ports of Vancouver and Seattle, or the mills at Squamish and Duke Point or Port Angeles. They carry the atoms of capitalism: coal and cars and plastic toys and oil and clothing and computer parts and everything we take for granted to live the lives we live here. They also carry the military power of the US nuclear submarine fleet and the Pacific Command of the Canadian navy based in Victoria. From time to time one sees sinister ships like the Zumwalt-class guided missile destroyers, which frankly just creep me out. These are nuclear weapons of mass destruction, cruising lithely through the serene waters. All around this landscape are the scars of clear cutting, new and old, and not an hour from where I am is the Fairy Creek watershed and the the old growth, Indigenous stands of the Carmanah and Walbran forests. Like everything around here, it is a context of mixed and conflicted feelings, activities and histories.

The ocean here is rich and complex and full of life below. Yesterday we watched a pod of five orcas, including a couple of babies and a huge male, frolicking in the slack water. They were breaching and spy hopping and tail lobbing and fin slapping. The young ones were learning hunting techniques while the adults milled around. There are salmon and anchovies and seals and octopuses and all manner of living creatures in the rich near shore kelp beds and in the deep marine canyons and reefs. Walking along the cliff tops here I’m reminded of the Jogasaki Coast on the Izu penisula in Japan, where local fishers steward the forests and have placed signs along the trails to let you know you are walking through a “fish attracting forest.” This is true on the coast here, as at least 30% of the nitrogen in the forest ecosystem come from marine sources, from fish carcasses that litter the salmon streams after spawning and are carried by bears and birds throughout the woods, where they feed the trees that maintain the streams that bring the salmon home to spawn. This is the most ancient cycle of life here on the coast.

I am in T’Sou-ke Te’mekw, and evidence of the ancient and historic use of the land and ocean is all around for those that have eyes to see. Yesterday, walking above the beaches of East Sooke Regional Park, I could hear people down below us on the beaches harvesting mussels. On the trail was a sign indicating that miners had once used the land here for iron, even though there was little evidence of that. But literally below my feet, very near that sign, on a flat spot above the beach near a creek of fresh water was a midden of shells, clearly indicating that the two on the beach were far from the first people to harvest shellfish here. It had all the hallmarks of a historic village site; different signs, different stories.

BC lifted the in-province travel restrictions on Tuesday and it feels good to stretch out and leave home for a few days. While I have loved the global travel of the before-times, I’m lucky enough to live in an incredible natural and cultural landscape here, amongst the ancient Nations of the Salish Sea archipelago, that I really don’t have far to go to actually be in another country. One could simply stay in one place and visit ever deeper into the natural and social history of these places, and perhaps we should. It is important to know our place in all of its complicated and complex realities, to let the emotions and thoughts flow in and out like the tides, bringing new nutrients and new life upwelling from the deeps with the currents and the change of the times.