Nuanced preferences instead of voting for sense making 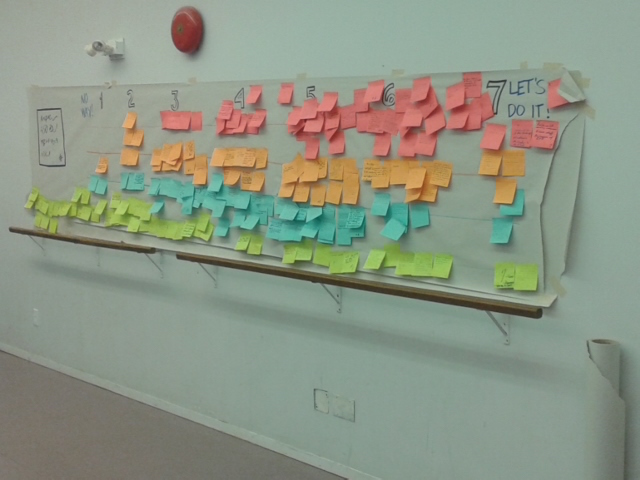 This afternoon I’m coming home after a morning running a short process for a church in Victoria, BC.  The brief was pretty straightforward: help us decide between four possible scenarios about our future.  Lucky for me, it gave me an instant application for some of the stuff I was learning in London last week.

The scenarios themselves were designed through a series of meetings with people over a number of months and were intended to capture the church’s profile for its future, as a way of advertising themselves for new staff.  What was smart about this exercise was the fact that the scenarios were left in very draft form so there was no way they could be confused for a “vision” of the future.  It is quite common in the church world for people to engage in “visioning exercises” to deal with the complex problems that they face, but such visions are doomed evermore to failure as the bigger organization is beginning to enter into a period of massive transformation and churches are suffering from all kinds of influences over which they have no control.

Visioning therefore is not as useful as selecting a lens through which the organization can make some decisions.

Each scenario contained some possible activities and challenges that the church would be facing, and the committee overseeing the work was charged with refining these down to a report that would, to use my own terms, be a collection of heuristics for the way the organization would act as it addressed future challenges.

Our process was very informed by some thinking I have been doing with Dave Snowden’s “Simple rules for dealing with complexity.”  Notably principles about avoiding premature convergence, distributing cognition and disrupting pattern entrainment.  Furthermore, the follow up work will be informed by the heuristic of “disintermediation” meaning that the team working on the project will all be working with the raw data.  There is no consultants report here.  The meaning making is still very much located with the participants.

So here was our process.

The whole thing took about 75 minutes.

The result of this sense making was the chart you see above.  Two hundred pieces of finely grained information ordered by the people themselves.  The project team now has at least three things they can do with this material.

Share
The daughter's pretty good, eh?
Back from a Cynefin deep dive