The urgency of the moment: why need matters 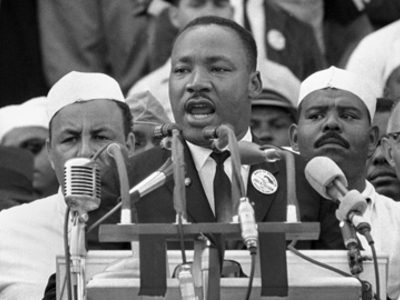 Martin Luther King’s famous “I Have a Dream” speech is best known for his statements of possibility and the energy with which he concluded his remarks.  It is a compelling call to purpose, to a world in which the future is only currently imagined.  It provided a generative image of what is possible, if not what is attainable, and it did what a good purpose does: it helped take the place of a charismatic leader.  Internalized, that purpose drives the movement.

But purpose alone is not sufficient. You need to also have a sense of the time.  Here is a section of his speech which is much more infrequently quoted:

It would be fatal for the nation to overlook the urgency of the moment. This sweltering summer of the Negro’s legitimate discontent will not pass until there is an invigorating autumn of freedom and equality. Nineteen sixty-three is not an end, but a beginning. And those who hope that the Negro needed to blow off steam and will now be content will have a rude awakening if the nation returns to business as usual. And there will be neither rest nor tranquility in America until the Negro is granted his citizenship rights. The whirlwinds of revolt will continue to shake the foundations of our nation until the bright day of justice emerges.

Leadership is not just about inspiring people with a purpose. It is also about sensing the moment, of what is possible.  When the need is understood then you can make an audacious claim like “This is no time to engage in the luxury of cooling off or to take the tranquilizing drug of gradualism.”  When you know that to be true, it gets activated in people. It is said, and they feel it as well.  It is what compels people to participate in something they would never have otherwise done.

King’s speech is a masterful invitation because it articulates the need and the purpose so well. Look at his notes and see how he emphasized NOW.  And his statements about “now” are not mere rhetoric: they are hypotheses based on informed hunches.  King’s speech is a nudge to the movement, to send it in a direction that was so aligned with the times that it still stands as a compelling call to action.  He got away with the grandest statements possible because the time was perfectly right.

This is a good lesson for anyone designing strategic work that calls people to do something differently.  You r statement of the need is not just a boilerplate recitation of the facts or the context.  Done well it also reveals something hidden about the present moment, something that people recognize as necessary, and something which confronts their complacency.  Good change work goes to die on the rocks of busyness and apathy.  Naming the need in line with the urgency of the moment is the antidote to that.