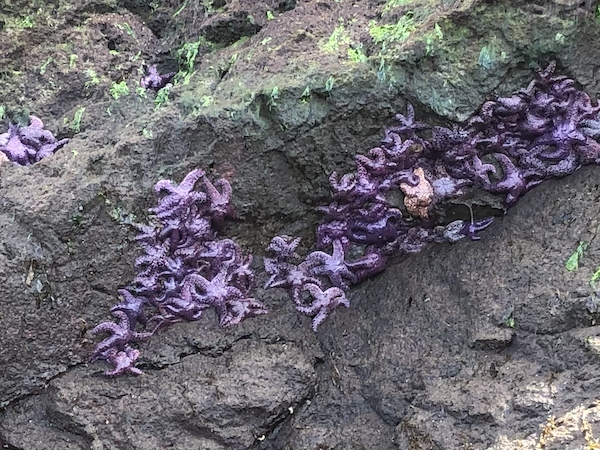 Sunday was one of these magnificent days we get on the south coast of British Columbia at this time of year, where the deep summer makes a preview appearance with warm temperatures, bright sunshine, and the scent of berry blossoms and new grass wafting on the air. It’s just humid enough that it is warm in the shade, and there is no bite in the breeze by the water. So it was a perfect day to launch the kayaks.

Our first paddle of the year took us out of Galbraith Bay on the northwest side of Bowen Island and had us exploring the shoreline around to Grafton Bay and back. The tide was low and there was lots to see, but most remarkable of all was the number of sea stars

Back in 2013, seas stars began dying by the millions. Over 40 species on our coast fell victim to what became known as Sea Star Wasting Disease which causes them to dissolve and die. Our once abundant sea star populations crashed. Our coast was once covered in deep purple ochre sea stars and the bottoms were patrolled by magnificent huge twenty-legged sunflower stars, with another few dozen species thrown in the mix. Overnight, these iconic creatures disappeared and some years it was nearly impossible to find even one.

The cause of the collapse of sea stars was attributed to warmer seawater – an effect of climate change – and the spread of a virus against which the sea stars were helpless. They had their pandemic, and it looked like entire local populations would be completely wiped out.

Last year, whilst paddling in the Gulf Islands, we saw some ochre sea stars in small patches on some of the more isolated islands, like the Secretary Islands in the Trincomali Channel. This was encouraging.

But yesterday, paddling at low low tide, we rounded a point and saw entire shorelines covered with young ochre sea stars. There were hundreds of them crammed into cracks and nooks and crannies. The vast majority of them were young, and clumping together protected them from hungry gulls that like to wolf them down whole. In a year these stars will be big enough to feast on the sea urchins that have cleaned out our local kelp beds, and thereby restore the balance of plants and animals in that little cycle. More kelp means more small fish, and that is good for the seals and sea lions and the salmon and the orcas. And so goes the chain of interrelationships and interdependencies that make up the marine ecosystem of my local fjord.

Seeing these huge groups of sea star survivors was moving, because I’ve missed them for these past seven years. And in a time of the global pandemic, where we are helpless against our own viral threat, it was good to be reminded of cycles, and resilience.

I hope our sea stars make it, and that they adapt to the ocean conditions and that they have somehow developed an immunity to their virus. I’m hoping they are different and no longer as vulnerable to climate change or disease. The threat of a second spike is always just around the corner, as it is with our virus at the moment. Witnessing a mass local extinction of an iconic species is sobering, and the reminder that survival is possible under changed conditions is encouraging.

I have no idea how OUR pandemic will play itself out: I imagine we will survive. But I’m interested in how we will be different too. This virus detests the things that will defeat it: collaboration, sharing of information, care and protection of the vulnerable, gentleness, compassion. Absent these things, the novel coronavirus COVID-19 will thrive and continue to run through us all, taking the vulnerable and randomly selecting from the rest. If we beat it, it will only be with the capacities and capabilities that make us the best of who we can be.

Share
Constraints that enable emergence
A framework for planning a harvest