Why rules can’t solve everything

Recently in BC, we have a had a child die in the care of the state.  This does happen from time to time, and when it does a process is triggered whereby the Representative for Children and Youth lanuches an investigation and makes recommendations which usually result in more rules and procedures to govern the child welfare system with the express purpose of never having it happen again.

I work closely with child protection social workers in BC and there is not a single one I know of whose heart does not break when something like this happens.  Everyone wears the failure.  Social work is difficult not because of the kinds of predictable situations that can be mitigated but because of the ones no one saw coming.  The Ministry of Children and Family Development operates under a massive set of procedures and standards about social work practice.  But no amount of rules will prevent every case of child death.  Just like no amount of rules will eliminate every case of discrimination, every war, every instance of every bad thing that happens to humans.

There is a simple reason for this as stated in this piece explaining why the world will only get weirder:

… with more rules we have solved most of the problems in the world. That just leaves the weird events left like disappearing 777’s, freak storms and ISIS. It used to be that even minor storms would be a problem but we have building codes now (rules). Free of rules, we’d probably have dealt with ISIS by now too.

Ultimately, this is why the world is getting weirder, and will continue to do so. Now with global media you get to hear about it all.

Rules look after complicated problems in which the cause and the effect are clear going forward.  But the problems we are seeing now are complex, meaning that the cause and the effect are only obvious in retrospect.  This property of complex system is called “retrospective coherence,” yet another useful term from Dave Snowden.  Retrospective coherence contains a dangerous pitfall for decision makers: it fools you into believing that the causes of a particular event are knowable.

You can see this pitfall in action in the comments section of this story about the latest child death in BC. Here is an example of comments that are predicated on retrospective coherence:

Every time there is an incident like that the Representative for Children and Youth makes her recommendations to change practices.  (Here is an example of a recent report on the suicide of a child in care.  The reccomendations start on page 85).  This one incident – a tragedy – is one that was not contemplated or seen by the system, despite a huge regime of rules to protocols to prevent things like this happening.  It will likely trigger a process of the RCY conducting an investigation and making a report.

Now that isn’t to say that there may not be liability and negligence here.  I’m not commenting on that.  If there was negligence or criminal activity of course that has to be addressed.

What I am saying is that this is an example where policy decisions are made that assume that one more rule or procedure will prevent future deaths from happening. 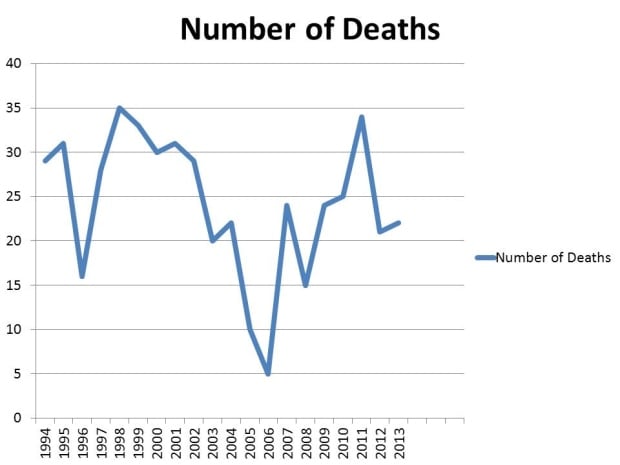 Here is another report on child deaths over time in Saskatchewan. You will notice the accompanying graph shows no trend and no predictability (even though the Advocate claims that things do seem to be getting better since 2009.  The graph shows a different trend.)  The Child and Youth Advocate in the province had a simple explanation for this:

… Bob Pringle says he has found a consistent and troubling theme while reviewing the child death cases.

“The common issue is: The quality of case management on pretty well every investigation we do is not adequate,” Pringle told CBC News. “That’s what went wrong.”

He said the ministry has good policies and procedures for social workers, but they are not being followed consistently.

Pringle noted his office has been pushing for improvement in those areas for years.

He added that since 2009, things do seem to be getting better, but he’s still not satisfied.

“Until the ministry can tell me — and put it in writing — that they’re meeting their case planning standards in child care for children in care and their contact standards, then they cannot tell the public that children are safe in foster homes,” he said. “I still do not have that in writing.”

And I wonder if he ever will get that in writing, because the truth is there is no way anyone can guarantee 100% child safety.  What he has discovered is that context matters, and even though he can’t actually put a finger on the causes he expects the Ministry to give him certainty.  There will always be events that happen that no one saw coming, especially in a society in which we now have rules and procedures for “every eventuality.” That is why child deaths are so devastating to everyone involved.  You think you SHOULD have seen it coming because retrospective coherence gives you a false sense of confidence that the system is knowable.  But it isn’t.

The complex dynamics that lead to individual child deaths are always changing.  No amount of rules will anticipate every possible cause that will result in a child death.  It is high time to think about how complexity practices can apply to this field, but I am not confident that this will happen soon.  Why not?  consider this comment on the news piece:

I don’t know what to say. Tell me then why these agencies continue to exist in their present form. Heads need to roll, there needs to be accountability. Now. Not after five hundred inquests. This is not that complicated. Maybe hire properly educated people for starters.

That is what the politicians hear.  the commenter is right: it is not complicated.  It is worse than that. It is complex.

Complexity thinking requires us to shift from a rules based practice to a heuristics-based practice.  It means that social workers need to have their experienced recognized and their working practices developed.  As with any role in society that responds to a crises, it needs concrete roles and protocols in place, but social workers, like soldiers and police officers and fire fighters, also need to be trusted to make good decisions in contexts they have never encountered before.  They need support for taking this approach to their training practice and leadership.  It does not put them above accountability, but it creates the conditions for them to develop much better and more resilient practice and for the watchdogs to create sustainable learning  as a result.  Meanwhile if there are issues of negligence, these can be addressed with legal proceedings.

As we have more and more rules in place to mitigate against child deaths, the circumstances of child death become more and more unpredictable.  And if social workers are bound to rules and not allowed to respond in novel ways, outside the policy manual, then they will be come less and less able to deal with surprises, and they burn out and leave the system, depriving us of their experience and expertise.  I would love to see a report from the Representnative for Children and Youth that helps guide social workers in these circumstances, that gives them a set of heuristics to follow rather than rules, and that creates a mutual accountability for the case by case outcomes.

We DO have to try something different in this realm, because we probably have enough rules and accountability in place, and yet the needle still moves erratically.  I think what we need to to do is start getting very practical and strategic and sophisticated about complexity approaches, both in the practice field and the political realm.  And we need leadership from the Representatives and the Advocates at the interface between the two to champion a new approach and put simple explanations of causality into context.