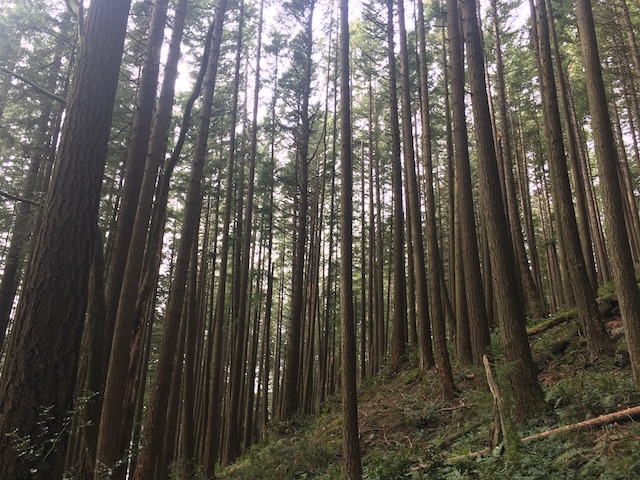 Last weekend I took a ramble across Bowen Island, where I live, with a friend and colleague, Annemarie Travers.  Annemarie and I have been teaching the Leadership 2020 program for a number of years now and we both love walking: she on the long pilgrimages of the Camino and Shikoku and me in the mountains of southern British Columbia.  We are also both interested in managing in complexity.

Saturday we set out to find a trail I had partially walked before – the Mid Island Trail on Bowen Island. I knew of parts of this trail but I didn’t where the trail head was on it’s east end, hidden as it is off a maze of private roads and driveways. Working on  a tip from another friend, we set out to find it, easily located it and made our way on the trail that comes and goes between being a broad, gravel lined multiuse trail, and sometimes a mere whisper of a path through salal and ferns. It mostly follows old logging road beds, as do many trails on Bowen, now thick within second growth forest. It is irregularly marked, and it travels through country that is criss-crossed with other trails, private land, and deer paths.  It is easy to get lost.

Over the course of the morning as we rambled, we were acutely aware of moving between two states described in the Cynefin framework. At times our walking and trail finding was Complicated (and Obvious) and otehr times it was Complex. thankfully we never experienced Chaos on the trail.  I have experienced chaos while hiking and it isn’t pretty, involving as it does helicopters, first responders and extended stays in hospital.

As we walked we reflected from time to time on these strategies and here’s what we observed.

You might think that a hiking with a complexity geek would ruin a walk in the woods, but I invite you to draw correlations between your own pastimes and the organizational or community challenges you face. I firmly believe that each of us is a lot more able to deal with complexity than we might think, and drawing on experiences from other parts of life, using a framework like Cynefin to make sense and port those experiences to other contexts can be a very useful reflective exercise.

Share
Every herring is a word
Prototyping and strategic planning